"Oh, I didn't think about that. Crud!" -- said I to the dude when he'd mentioned last month that the new "squirrel proof" bird feeder I'd bought for our cardinals had an overlooked flaw:

Didn't even think about it, which led to an amusing conversation between him and me.

Surely enough, when the next dusting of snow came along, I found myself chipping away at the ice with a stick. 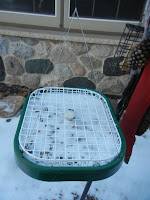 I didn't dare carry an ice pick outside, for fear of slipping on said ice and accidentally stabbing myself. (I can almost imagine the poem on my tombstone now...)

So anyway, I got a squirrel baffle to use as an umbrella for the feeder. (Notice how I said nothing about the baffle deterring actual squirrels? As with most deterrents, baffles are not all that baffling to squirrels. Personally, I think our dog jumping against the window and scaring the bejeebers out of them has more to do with the lack of squirrels swiping bird seed than the type of feeder I chose or any other products I've bought.)

So back to the baffle... As an umbrella, I can say it does make some difference, depending on the type of snowfall. It works pretty well if the snow is coming straight down. But if the snow is blowing? It's still better than nothing, I guess.


After the first "post-baffle" snowfall, I couldn't punch through the snow like I'd done before. I had to put bird seed right on top (above the squirrel-proof mesh), and just let our dog do her thing -- stalking and terrifying the unwanted critters.

The second snowfall wasn't so bad. There was a lot more on the baffle than on the feeder, and some seed was still available to the birds.

This last picture is from yesterday (February 7th). Several inches of snow fell; and while there's still a layer of snow on the feeder, it could have been so much worse! Plus, it may be hard to tell from the photo, but the thicker snow is toward the edge of the feeder. I may be able to poke through some of the thinner stuff so that the birds can get to it again -- if I can find a stick in all that snow!
Oh, and speaking of birds. I think at least some of them appreciated their little umbrella. We had medium to light snow falling all day, and birds like this dark-eyed junco were still coming up to the feeder to peck around underneath the shelter the new baffle provided. I wish it were better quality, but it is hard to take a photo through a window screen:

That reminds me... I have some other bird photos I need to post as well.