The Summer When Texas Visits Wisconsin

It's greener in Texas this year than it is in southeastern Wisconsin.

Remember Texas? We were just reading last summer about how awful the drought was and praying for victims of wildfires.

Well, it's rained in Texas since then. It's rained a lot!

Even in sandy areas of the state, the deer can be seen grazing among green grass... 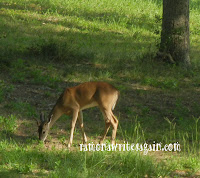 But not so much here in Wisconsin.

We were in a snow drought in our part of the state this year, so we were already behind on moisture when spring began.

The subsequent lack of rain has especially taken its toll. The only life left in the grass is in areas under trees. You can easily tell the areas of the yard that receive full sun and those that get shade relief: 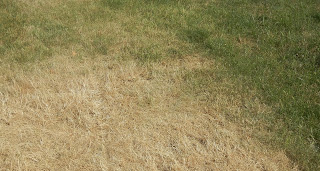 This year, it feels like we moved back to Texas and had only visited Wisconsin!

But in amongst the dormant grass, a few gems emerge. Plants I didn't know existed because they're always getting mowed down before they bloom:

I was told that a previous owner of our property had a patch of wildflowers in the front yard. Occasionally I find a remnant of that patch, but it was overtaken by invasive plants before we moved in. Efforts in the past to let part of it grow "just to see" have ended up less than glamorous.

But, this may be the year I get to rescue those remnants and move them to better locations.

Our grass hasn't been mowed since early June. If the drought continues, there are a few other wildflowers in that area that may also start blooming.

Some of them may be annuals, but I'm hoping they'll re-seed readily in their new venues. If they're perennials, they'll be tougher to move without killing them.

Editing to link up with Wildflower Wednesday over at Clay and Limestone, who has a neat post up this month about Joe Pye, and also to celebrate that we received 2 inches of rain this week!