Busted by the Preacher Man + Blurb About Men and Church

The dude and I have been going at it lately (in a playful way). First, he dares to speak of me in his sermon (wasn't even deterred by the youtube video). He made fun of me for dragging him to some movie about an American quilt many years ago, and talked about the only reason he went was because he loved me (and had this unsettling need to count ceiling tiles in a movie theater). Of course, the church howled when he told them the name of the movie, causing me a bit of embarrassment to top it off. (Okay, so I laughed, too; but that's beside the point.)

So anyway, like many professionals, I have an appearance fee. Granted, mine is only five bucks, but it makes the point. However, if I make an appearance in a sermon without prior approval, there is a penalty charge. AND..... if my appearance causes discomfort on my part, there is a sliding scale multiplier depending on my level of embarrassment. So needless to say, I got a new pair of capris out of the deal.

Still, I had this mischievous need to jab back a little bit, and when I was working on the computer up at the church during the middle of the week, I found my chance. The title slide for his sermon was just sitting there tempting me. You see, when we went to Michigan last July, the dude made fun of me relentlessly for taking photos of "dirt, dead trees, and pieces of bark lying on the ground". He often uses my digital photos for backgrounds, so I thought I was doing him a favor. Plus, there were a lot of interesting colors and textures in those dead trees. I told him that any photos he uses had better carry a disclaimer that he made fun of me for taking said photo. And of course, they haven't. 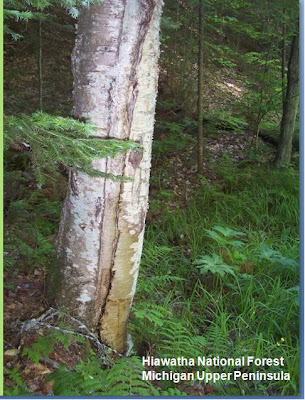 So... I opened his title slide, and added a few words to it... something along the lines of, "I made fun of my wife for taking these pictures in ..." and left the rest the same. I felt guilty later in the week (what is up with that?!?!?!?) and decided I should warn him. He played dumb and told me that he'd already given the sermon slides to the lady who runs our projector.

Saturday evening, however, he feels guilty, (heh heh heh) and shows me that he had indeed caught my little prank, and edited it out. He also had made a new title slide for his sermon, and this is what it looked like: 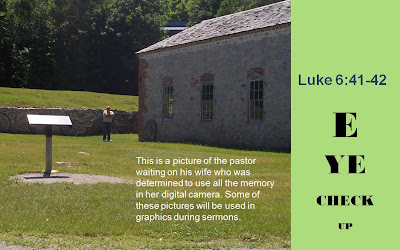 The turkey! I haven't decided if said slide has earned me another appearance fee or not. I guess I kind of asked for it!

On an interesting note, he has recently read a book titled, Why Men Hate Going to Church, and it really struck a chord with him. He's been changing things up a bit, and that's included making his sermon into a two- or three-part message with other elements (like standing up and singing) sandwiched in between. He's actually gotten a lot of positive feedback from many different people, not just the men -- some have said they actually listened to the entire message for the first time ever. It was a bit awkward for the musicians the first time he did this, but it's quickly becoming smooth in transition.

He's also incorporated some participatory things in on occasion. The day we did the familiar "eye check up" passage, he got some folks to hold a large log in front of his eyes while he walked over to another person and blindly felt around on their face, offering to remove their speck. It was pretty humorous.